Fight For The Things That You Care About, But Do It In a Way That Will Lead Others to Join You

US Supreme Court Justice Ruth Bader Ginsburg (1933-2020) developed a breathtaking legal legacy and became an unexpected pop culture icon. She was appointed by President Bill Clinton and took the oath of office on August 10, 1993. She was the second female justice of four to be confirmed to the court, and a tireless fighter for truth and justice. RBG, a pioneering advocate for women's rights, took a broad look at gender discrimination, fighting not just for the women left behind, but for the men who were discriminated against as well.

Fight for the things that you care about, but do it in a way that will lead others to join you, she famously said in 2015, in response to a question regarding the advice she would give young women today.

Just days before her death, RBG stated, "My most fervent wish is that I will not be replaced until a new president is installed."

This comfortable RBG unisex short sleeve shirt is a mid-weight piece of clothing.

I am soooooo sad and sorry Ruth Ginsburg passed before Biden got in office. But it makes me proud to wear my shirt and know she made a difference. (FYI, I am a sewer so I modified my shirt) 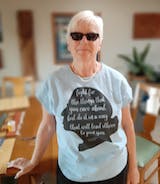 I am proud to wear my RBG shirt. It expresses a sentiment of togetherness with others. I would like to “bring along” friends who do not share RBG’s vision. 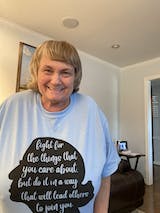