Cool Biden Cap - Made in the USA

This Made In America Cool Biden Cap ia all-American, like Joe Biden, our soon-to-be 46th President. For those times you want to be both subtle and send a clear message, the image of the American flag colors reflected in the iconic frames is undeniably Biden -- cool, Democrat, and America.

The coolness of the Biden-Harris ticket will never go out of style. Wear this Cool Biden Cap for the many years ahead of democratic leadership until the cap is threadbare and it will still be cool!

This baseball hat is considered a "Dad Hat." A democrat Dad hat. It is slightly heavier weight than the standard dad hat. It is a high-quality premium and patriotic dad hat that is perfect for shielding your head and eyes from the sun. Great for athletics or casual wear.

Each hat is embroidered in the United States by small, "Mom-and-Pop" embroidery businesses. Several of them are women-owned small businesses.

This NAVY hat fits sizes: 6 1/4 - 7 3/4. If you measure your head with a flexible tape measure (or just wrap your head with a string and measure the string), for this hat to fit, your head would need to be between 19.75 and 24.5 inches around measured across your forehead and right above your ears. It fits hat sizes Small, Medium, Large and Extra-Large. Not Extra-Small and not Extra-Extra-Large.

I love wearing this cap. Love the aviators on it.

Cool Biden Cap - Made in the USA

Comfortable, stylish and spot on, just like Joe himself.

Love this hat. It is very adjustable and is made with attention to detail.

Nice cap and a great way to support my choice for president. 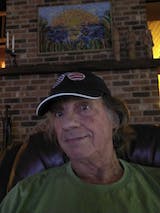 I love my Cool Biden Cap! Goes perfectly with my Ray Bans Aviators!

Fabulous design and well made with adjustable hook and loop closure

I really like the “sunglasses” hat. I like the look and the quality of how it’s made. My challenge is that it is almost too shallow to fit well. I still wear it, but continue to adjust it to make sure it won’t fall off.

I ordered the cap in late August, and it showed up seven business days later.

I live in the Bay Area, and so have gotten a lot of positive feedback about the hat. And I suppose that's warranted, because it's a really cool hat, to be honest.

In the end, it's probably the most Patriotic looking hat I’ve ever worn.

But, I’m not going to let a draft dodging, lying, hack-businessman, father of charity cheats, take patriotism from me. No, I love what this country has been, and can be. And I’m standing with the muscle car driving, American loving, father of Veterans.

Thanks for putting these hats out there, I know at least one of my friends has already purchased one!

Keep up the good work and stay safe!