Joe and Kamala's victory is the victory of the LGBTQ+ community as well. Some may be  okay with exchanging acceptance for a tax break or access to power, but most just want to live their lives without persecution."

The LGBTQ community can breathe easier knowing it has true allies in the White House and not a con man who holds a Pride flag in one hand while stabbing us in the back with the other." -- LZ Granderson

In May 2012, Joe Biden historically became the first highest ranking official to back same-sex marriage. “I am absolutely comfortable with the fact that men marrying men, women marrying women and heterosexual men marrying women are entitled to the same exact rights. All the civil rights, all the civil liberties. And quite frankly I don’t see much of a distinction beyond that,” he said during an appearance on Meet the Press.

Kamala Harris has publicly backed several strong moments that have benefited the LGBTQ+ community. She did not support the constitutional ban on same-sex marriage in 2008, and - after marriage equality was restored to California in 2013 - Harris officiated the first marriage as a bold statement. In 2018, as a senator, she introduced the Do No Harm legislation to prevent the use of religious beliefs to be used as a means to discriminate against LGBTQ+ Americans.

Joe and Kamala are energized to fight for the soul of this country, and Americans are fired up. Show how fired up you are - for you country, and for equal rights for your community - in this comfy Joe Kamala LGBTQ tee, knowing this duo will fight for justice and not leave any Americans behind.

I Love My Shirt! I show my pride in Joe and Kamala every time I wear it. I always get compliments. You can show your PRIDE by wearing this shirt too!

Very well designed and proud to wear it!

I have worn it 4 days since election day. So proud to have these 2 representing andnprotecting my rights. 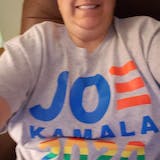 I'm proud to wear it!

Love this shirt. Got for both of my kids and they love them!